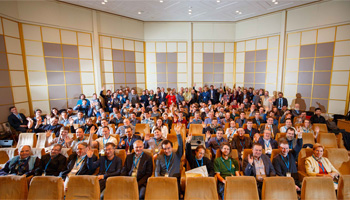 The subject of the 4-th OS DAY conference, held on May 23-24 at the Russian Academy of Sciences, was Russian-made operating systems. Representatives of research institutes and software companies met to share experiences, establish contacts and discuss the most important challenges of the era: development of operating platforms and enforcing information security.

This year the conference first had a new format as a communication platform for theorists and practitioners in system programming, hardware manufacturers and customers, created by joint efforts of the IT community. Whereas the first conference was run by the Institute for System Programming of the Russian Academy of Sciences (ISP RAS) and a group of IT companies DZ Systems, now they were joined by GosNIIAS, Swemel, BaseALT, Open Mobile Platform, Kaspersky Lab, RusBITech, "Tizen.ru".

"The joint event with representatives of different circles of the Russian IT industry is of strategic importance,” Arutyun Avetisyan, Director of ISPRAS, said. “The situation today is such that only within the community, in close cooperation it is possible to develop operating platforms, because no one could be able to do it on its own. Thus, it is of particular importance that the new format of the conference has aroused great interest among wide circles of software developers and has been approved by the community. It's time for us to consolidate, to share the experience that everyone has accumulated individually, to launch and start implementing an integrated program of research and development aimed at creating new technologies and experts. It will make the most effective use of available resources - information, personnel, money - in order to move forward, develop and face any new challenges, including those in the field of information security."

Yuri Khodos, deputy director of Swemel, supported his colleague: "In addition to the main and general task - securityof Russian software – we can see a commercial aspect. As well, we realize that the best effect can be achieved in case this tendency has rather a contention-based than competitive environment. We are grateful for the OS DAY platform organization, which has produced a synergetic effect". The importance of direct communication of the industry representatives was also emphasized by Alexander Oruzheinikov, head of NTC-1 “RusBITech-Astra”. “Such conferences as OS DAY should bring together all the participants in the development process of the key information technologies in the country - from students to doctors of science and academics, and make them one team," he said.

For four years, the OS DAY conference has become one of the important events shaping the ideology of Russian software development in general and operating platforms in particular. At the first OS DAY conference in 2014, there was debate about what exactly operating systems were, and whether it was worth developing them in Russia; the second one raised more applied questions related to the difficulties encountered with the use of imported software; at the third one, OS deployment on various hardware platforms was considered. This year, the major topical issue has been highlighted: ensuring the quality of operating platforms, first of all security.

There were three times as many participants at this event than at the previous ones, the subject of talks has significantly expanded, some colleagues who we have not met before have joined," sums up Dmitry Zavalishin, General Director of DZ Systems. “For us, it was important to organize everything so that we could see ourselves and the entire industry as if in a mirror." "This is not just the sharing experiences, but, in many ways, the opportunity for colleagues to listen to each other and adjust their own visions of the issue, their worldview,"- says Anna Kahn, head of the GosNIIAS sector.

"We are witnessing a new revolution," said AndreyDukhvalov, head of the Advanced Technologies department at Kaspersky Lab, "the revolution in connecting various devices to the Internet. I'm sure that quite soon the amount of traffic generated and consumed by devices will exceed the amount of traffic consumed by people. Connecting to the network promises a lot of new bonuses, which may also bring some risks and threats. In these new conditions, the only correct approach to ensuring cybersecurity is the use of OS with integrated security tools."

Vitaly Lyutikov, the deputy director of FSTEC of Russia, emphasized the importance of this topic in his speech to software developers: "Implementing procedures for the safe development of operating systems is one of the areas that we pay special attention to. We have prepared a national standard for information protection, which introduces the activities for minimizing the emergence of vulnerabilities in the development of operating systems, and there is already experience in its implementation. Of course, for now, the application of the standard is optional, but we would welcome and recommend that developers and vendors of operating systems could estimate the need to implement it in the product development process."

"The old security requirements formulated in the mid-1990s are outdated," continues Mikhail Kostenko, the head of a FSTEC department. – And some new threats, unaccounted for by them, have appeared. Whereas four years ago the issue of vulnerabilities was not raised, now it has come to the fore."

"Security is not a fixed state, but a process," said Alexei Smirnov, adviser to the General Director of BaseALT, “Therefore, the new requirements of FSTEC for operating systems are much more complicated and tougher than previous ones. However, the clampdown is gradual: it is important that the requirements would be feasible at this stage."

The two-day conference on the most important aspects of creation of operational platforms ended with a general discussion and adoption of a resolution, the text of which is going to be completed by the professional community. Among its topics is the point about the need to create and implement a single comprehensive program of research and development in the field of system programming and information security under the patronage of ISP RAS. The proposal has been also formulated for regulators, departments and standardization bodies to addto the normative acts the requirements to use file formats that comply with GOST R ISO / IEC 26300-2010 and freely distributed fonts, when preparing documents, rejecting to use proprietary formats and fonts that increase technological dependence on foreign software.